The Risk Management Committee works proactively with employees through continuous training and drills to ensure compliance. We have been working to have all employees attend anti-harassment training since fiscal 2017.
To prepare for an increase in customers from overseas, particularly during the 2020 Tokyo Olympic and Paralympic Games, we are introducing multilingual emergency announcements to be played automatically when fire alarms operate. In the first half of fiscal 2019, the announcements were introduced at three stores: the Sapporo store, the Ikebukuro store, and at the Chofu store, which is near to Tokyo Stadium where the Olympics will be held, and where Olympic staff will be accommodated in the Creston Hotel on the upper floors. During a fire, the emergency announcement will be played in three languages: Japanese, English, and Chinese. The introduction of multilingual announcements will be extended to other stores going forward.
After the Hokkaido Eastern Iburi Earthquake struck in September 2018, large scale power outages occurred in Hokkaido. At Sapporo PARCO, it was vitally important to ensure the necessary communication and gathering of information amid the dual event of an earthquake and power outage. From this experience, we have recognized the importance of securing communications during power outages, and have distributed magnesium air batteries to every store for recharging mobile phones during emergencies. The batteries generate electricity when salt water is poured into them, and a single battery can fully recharge 30 smartphones. Ensuring that the necessary communications can be conducted without worrying about batteries going flat, helps to alleviate uncertainty on site.

At the Ikebukuro store, over 1,000 people from commercial facilities, companies, universities and so forth in the Toshima Ward participated in a drill on measures for people who have difficulty returning home. This drill envisages the total stoppage of all public transport, including trains, in the event of a major earthquake. In conducting the drill, we cooperated by providing notices on a large screen on the wall of Ikebukuro PARCO in an effort to participate in the drill with the local community. 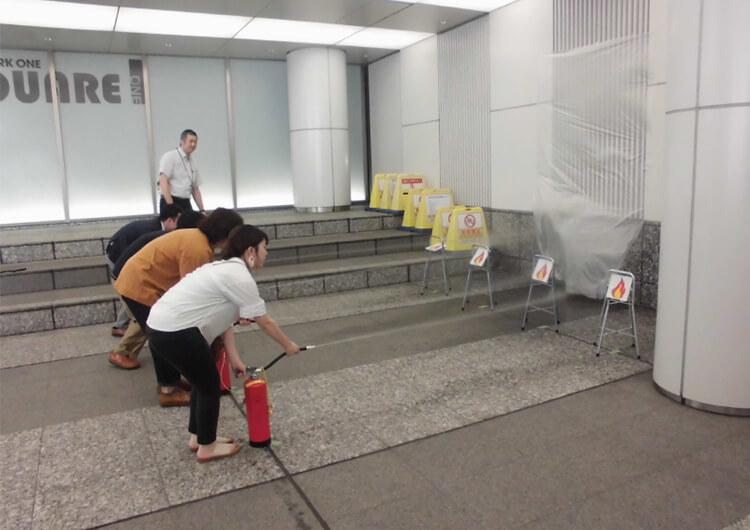 At the Sendai store, we held four disaster readiness experience courses: earthquake experience, thick smoke experience, fire extinguisher experience, and emergency service calling experience. Many of the participants commented that they would like the courses to be held regularly and made available to other staff. At the next training, foreign national volunteers also participated, to practice guiding foreign nationals in evacuations and making emergency announcements for them.
At the Tsudanuma store, crime prevention seminars are held on various themes once a year, and the shop staff participate with interest. The most recent seminar was held just before the store opened, on the theme of countermeasures for violent persons. We held a joint drill on countermeasures with Funabashi Police Station and Chiba Prefectural Police Headquarters. 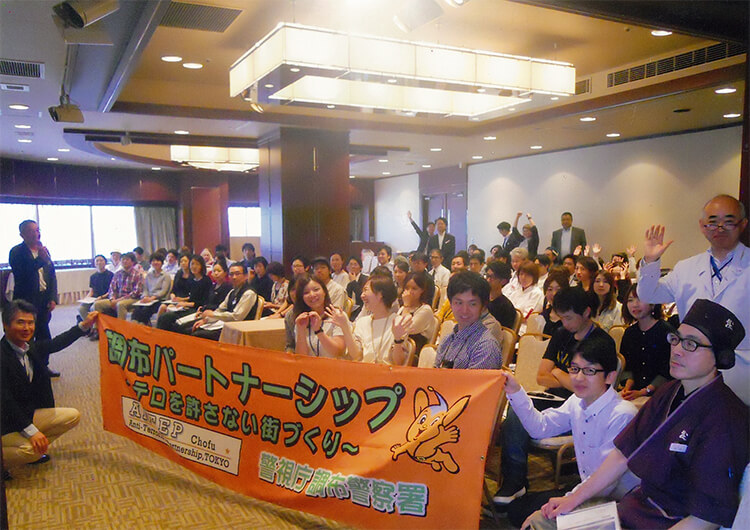 At the Chofu store, we held crime prevention workshops in coordination with the Tokyo Metropolitan Police Department and Chofu Police Station since Tokyo Stadium is a major site for the 2019 Rugby World Cup and the 2020 Tokyo Olympic and Paralympic Games. The workshops included examples of previous international events such as Olympics being used as targets for terrorist activities. A police officer explained how the ingredients for making a bomb could be purchased from an ordinary home goods store, and we made sure that staff understood that they should promptly contact the police if they sensed anything unusual.
日本語